Accueil > Actualités > ORGANIC SOYBEAN – The small seed that is worth gold

ORGANIC SOYBEAN – The small seed that is worth gold 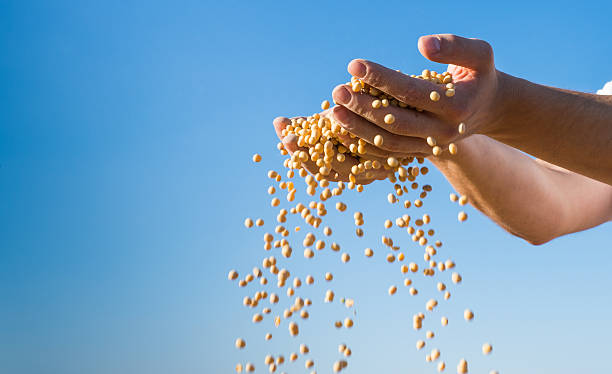 In this period of crisis, if the sector of the organic agriculture is doing well with an ever-growing world market, it is however not without difficulty.

How can we meet the growing demand from consumers who are despite everything concerned about their wallets, in a context of rising prices for most raw materials, logistical difficulties and shortages of many products ?

Focus on the organic soybean, one of the most strategic commodities in animal feed that seems today in a dead end.

The month of March was particularly marked by concerns about the scarcity of organic soybean seeds and meals, as well as their exorbitant price levels.

While the operators of the sector had more or less adapted to taps closed in China since the first lockdown, now the other two main suppliers are more than missing.

In India, the local seed market, after several months of steady increases, has become extremely volatile. Farmers' groups seem to keep their piles waiting for the best time to sell.

Moreover, we can wonder about the volumes still available knowing that the yields of the 2020 harvest were particularly affected by the yellow mosaic virus which has raged in many regions.

In this context, between Indian exporters who have not fulfilled their contracts and those who have little to offer - even if meal prices would be set at 1000 EUR / T FOB - flows to Europe have dried up considerably.

In addition, Indian sellers are more cautious since the case of ethylene oxide detected in sesame seeds and more and more other materials, according to the list of recalled products which continues to grow. They may prefer other destinations, such as the United States, where the use of this chemical would not be completely prohibited in conventional.

To top it off, the country is currently affected by a second wave of coronavirus with the exponential increasing number of positive cases for the B.1.617 variant which would be a "double mutant" and which, although more asymptomatic than the previous one, would spread more quickly in homes and would affect the youngest.

In the meantime, all urban areas are under curfew and the most affected districts are totally in lockdown, including Madhya Pradesh, the largest supplier of organic soybean seeds and cakes. The majority of the population left the cities for the villages, forcing the factories to idle.

To follow the evolution of the epidemic and the future restrictive measures taken by the government which will inevitably have an impact on trade while the country is experiencing an unprecedent human and economic catastrophe.

Another continent supplier of organic soybeans that has recently been talked about for non-performance of contracts : West of Africa and especially Togo.

Indeed, several European importers have seen their contracts denounced and are busy finding other sources of supply.

In Europe, no more seeds available on the horizon for a long time.

According to Soybean and Corn Advisor, the yields and first harvests in mid-April in Argentina are rather disappointing. Not to mention the rumors of a strike in the oilseed sector circulating in the market.

On the opposite, in Brazil, despite late sowing and excessive rainfall, experts are predicting a record soybean crop this year. Harvest now coming to an end after several weeks of delay.

But this country is unfortunately also hit by a very deadly wave of Covid-19 via the P1 variant, known as the “Brazilian variant”.

Here again, in addition to the distress caused by the sanitary situation, we can expect collateral damage in terms of logistics and global trade.

A shipment to Holland of organic Chinese soybean meals would have been reported recently but at what price ?!

Other shipments from China are possible but all the signals are in the red and hopes for a notable improvement seem rather remote: still six months remain to be held before the arrival of the new harvest in the main basins of production…