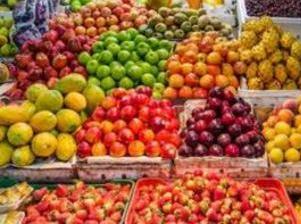 The figures provided by the European Commission, in its market Briefs of June 2021 EU imports of organic agri-foods products – Key developments in 2020 show some changes in international trade in organic products.

While the volume of imported food preparations including infant food, confectionery and pasta has increased by +29.6%, that of Beverages decreased by -22.3% and that of Commodities by -11%1

Another observation is that the leading quartet of the main importing countries does not change with, far aheadof, the Netherlands (31% of imported organic agri-food products), followed by Germany (18%), Belgium (11%) and France (10%).
France and Germany gain a few points compared to 2019, unlike Belgium and the Netherlands which lost some.

As for the classification of exporting partners, it has been somewhat turned upside down…

Ecuador (12% of organic agri-food products exported to Europe) and the Dominican Republic (9%) have dethroned China and Ukraine which, in 2020, represent only 8% respectively each.

While Ecuador and the Dominican Republic have benefited from the sharp increase in imports of tropical fruits, nuts and spices, lemons and other organic fruits, on the other hand, the decline in China and Ukraine could be explained by the sharp drop in imports of organic oilcakes, cereals and sunflower seeds (seeTABLE 3 – Source Traces). 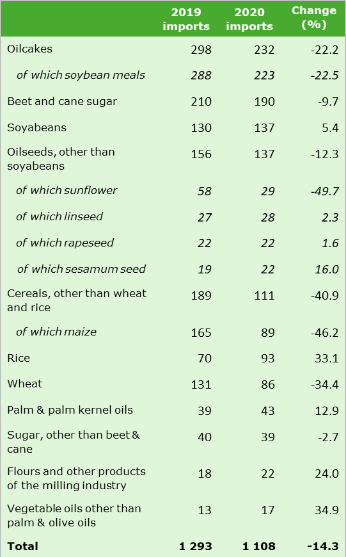 -34.4% for wheat, -41% for other cereals (corn in particular), but also -49.7% for organic sunflower seeds… rather surprising figures!
If we look a little more closely (TABLE 14 – Source Traces), we see that imports from Ukraine – a major supplier of cereals, particularly maize and sunflower – have fallen by 44%.

Imports of organic wheat and maize from Kazakhstan are estimated to have fallen by no less than 96%.

But then, where did organic cereals and oilseeds from third countries go in 2020?

Have the needs on these materials been less important in Europe during the sanitary crisis and would certain organic sectors have suffered from this crisis?

Would intra-Community trade have been favored, willingly or by force?

Certainly the supply difficulties – consequences of the various lockdowns, restrictive measures, shortages in manpower and containers etc… – have only speeded up and amplified the relocation of purchases to greater proximity. Especially since cereal harvests in third countries have not always been optimal and their prices have increased significantly and therefore lost interest.

It is also possible that the organic sector has left a few feathers in the battle against Covid-19 and that the needs have been less important.

Most likely also that China has played a key role, with a diversified and offensive purchasing policy, especially in corn, wheat and soybeans. To cope with an insufficient domestic supply and a replenishment of its pig population, after the epidemic of African Swine Fever that hit the country from the summer of 2018, China was able to scoop up most of the volumes… even in Organic!

More than 22% drop in organic oilcakes imports in 2020

The reasons for the decline are, in our view, probably similar to those mentioned above for cereals.

China with -46.7% of oilcakes and -83.4% of organic soybeans exported in 2020 will have given a lot of trouble to the animal feed sector!

While China has lost points in the ranking of exporters, it remains by far the largest supplier of organic oilcakes with 134,800 tons in 2020, followed by India with 66,500 tons and Kazakhstan with 11,700 tons.

Regarding organic soybeans, we highlight the leadership of the African continent with Togo, “Number One” of the ranking, having provided 51,000 tons of seeds in 2020 (+20.4% compared to 2019) but also other countries such as Uganda or Benin which – although so far very little present – seem to have a very promising future. 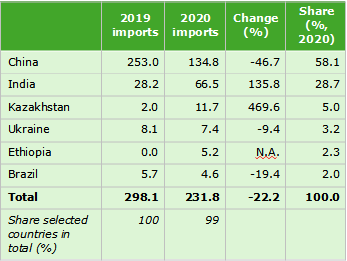 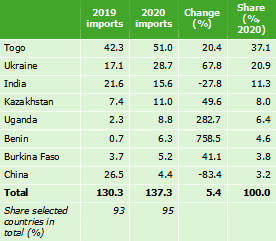 The resulting analysis is that of the Cabinet Boyer.

Cabinet Boyer cannot be held responsible for the use that might be made of its analyses. The possibility of errors cannot be ruled out.