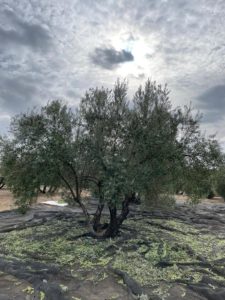 On the ground, we live them, we endure them, for the worse and sometimes for the better, but no culture escapes it, and the olive tree was no exception this year.

It is November and now all eyes are on the new olive harvest particularly tested by the climatic hazards that have hit the entire Mediterranean basin since last spring.

The month of April arrived with its unexpected frosts below -7 ° C, affecting the early flowering and reducing the amount of olives sometimes significantly on trees.

France, but even more so Italy and Greece, have been particularly tested.

After the cold, the exceptional heat wave (the worst even in 30 years), the severe drought and its fires that destroyed many olive trees, this one has recently seen heavy rains and wind gusts on Crete and the Peloponnese, further reducing the already weakened production capacities, estimated around 180,000 tons for 2021-2022, according to the broker specialized in the Greek market, Luigino Mazzei.

Italy is not spared either. The south where the largest olive oil producing region is located is going through an unprecedented crisis.

In addition to climatic hazards, lack of water, the spread of the pathogen – Xylella fastidiosa – Italy faces a shortage of labor and high production costs.

Due to covid-19 and the slowness of local institutions to respond farmers’ demands, seasonal workers from Eastern Europe are lacking.

Faced with all these difficulties, if some producers have no choice but to delay the olive harvest, in the hope of seeing better yields, others simply decide to abandon the olive trees.

However, the outlook remains positive, with a very good quality harvest and an estimated olive oil production of around 300,000 tons, according to sector associations and the writer, journalist, oleologist and director of Olio Officina, Luigi Caricato.

In Spain, the 2020/2021 campaign ended with a carryover in olive oil of about 400,000 tons, a stable but still strong market, despite a reduced quality that caused a lot of hassle to sellers throughout the year.

Spanish olive trees have not been spared and have suffered until recently from great water distress, due to abnormally high autumn temperatures of around 27°C and above.

The lack of water has been terribly felt in the olive groves, especially in the southernmost regions of the country, to such an extent that Andalusia, which represents 80% of the Spanish olive oil yield, is considering a drop in its production this year.

The rains, admittedly late but above all uneven depending on the region, are nevertheless regenerative for both trees and fruit pruning, and improve oil yields, which are between 18% and 20%.

For the time being, the Junta de Andalucia estimates olive oil production in Spain at around 1,350,000 tons.

Consolation prize: the quality is rather good and the arrival on the market of lots of fresh olive oil brings a little relaxation in prices.

According to the latest estimates collected by MERCACEI from specialists in the sector, Tunisia expects to produce between 220,000 and 240,000 tons thisyear, despite the rare summer rainfall recorded on the country.

For Morocco, the director of Agropôle Olivier, Noureddine Ouazzani, estimates a volume of 156,000 tons, a production 30% higher than last year.

The mild temperatures and weather conditions in September alleviated the scars of the summer drought which had hampered the correct development of the fruits.

The new harvest has only just begun and we will have to wait until the end of December 2021 to see the profiles of each one take shape and see more clearly about the qualities and price levels.